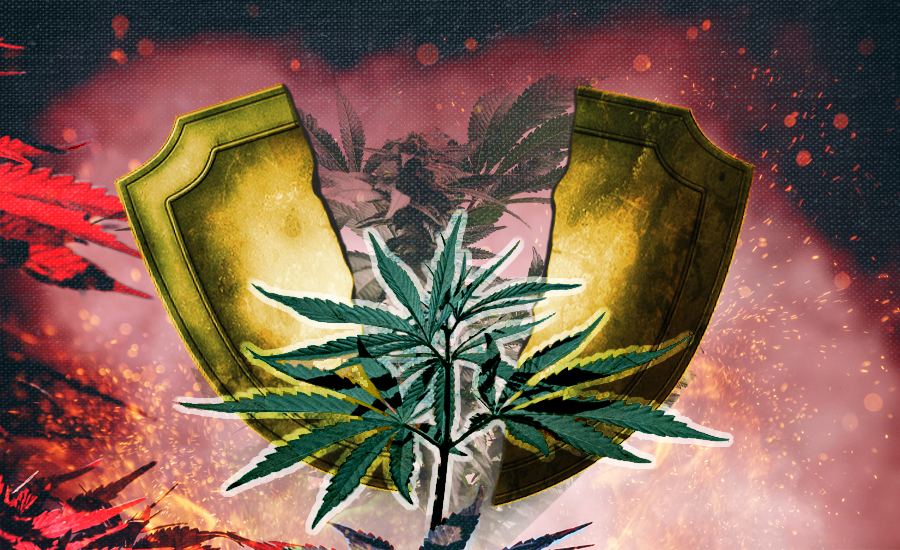 Risky Business: Why is Cannabis Insurance so Hard to Get?

If you’re a person like me who is generally aware of… things, then you’ve probably heard about the particularly intense wildfire season we’re experiencing in the Western U.S. You may also be aware of the fact that the Western U.S. is home to a significant portion of the country’s cannabis industry. This is a bad combination—particularly for outdoor growers. Already this year, many crops have been burned, or otherwise made worthless by smoke damage. Colorado farmers are reeling from an early frost, and we also saw growers wiped out by flooding just a few months ago. Cannabis is susceptible to all the same risks as any other agricultural product— floods, fires, pests, disease, drought, frost, hail, etc. But on top of all that, cannabis comes with the added bonus of elevated security threats and stricter product liability (it’s a psychoactive drug that relies on a cash-heavy business model). Hooray!

So, you’re a business owner who is probably in debt or beholden to investors in some capacity. How can you minimize these risks and hopefully get some revenue going? Do what every business does; get some insurance! Oh wait, you’re a cannabis business…

While insurance seems like an obviously necessary service for cannabusinesses (in fact it’s legally required in California and Massachusetts), it is still hard to come by. Some estimate that cannabis could deliver $1billion in insurance premiums, but only a handful of insurance companies are willing to jump in. And even then, they don’t really advertise the fact that they are willing to accept cannabis clients. One farmer in California reported that he could only find two insurers willing to supply him with (the legally mandated) general liability coverage, and still couldn’t find anyone to cover the crop insurance he wants. Even if he does find a provider, you can guarantee he won’t have any negotiating power with respect to the price. Some cultivators report paying twice as much as they would for non-cannabis crops.

Why is it so hard to get cannabis insurance?

So cannabis is risky. Shouldn’t that attract insurers? Isn’t risk the main driver for insurance sales? Well, yes and no. Insurers like risk when you bear it. They like when they can quantify the odds of having to pay you money, so that they can price their coverage accordingly. But when the risk is on them, it’s another story. As with most issues in cannabis, it stems from the disconnect between federal and state law. When it comes to federal law, all commercial cannabis activity is a violation of the Controlled Substances Act. Right off the bat, this disqualifies cultivators from participating in the federal crop insurance program through the USDA. But even with private insurance, running afoul of  the Treasury’s Financial Crimes Enforcement Network (FinCEN), particularly the Unlicensed Money Transmitter statute, (18 U.S. Code § 1960) is a major concern. Under that statute, many cannabis investors, owners, and employees could be prosecuted for transmitting any funds that they know “have been derived from a criminal offense or are intended to be used to promote or support unlawful activity.” Since federal law considers cannabis activity to be a criminal offense, anyone who gives them money, or receives it, is technically laundering money. Being a technical money launderer makes it difficult to maintain professional liability and Directors and Officers (D&O) insurance. Some insurers are rewording their coverage to create an exception for good faith cannabis exceptions, but these insurers are few and far between.

The legal uncertainty, while a problem for anyone dealing with the cannabis industry, is especially concerning for insurers because it hits at the heart of what they do. Insurance is priced according to the risk it covers, but with cannabis law, the rules, and consequently the liability risks, change literally every day. We should know, since part of our job at Simplifya is to monitor 20 states and more than 150 local jurisdictions for changes in their cannabis requirements. Even though the industry has assurances from US Attorneys General that state-compliant licensed operators will not be raided by the feds, those assurances can be retracted at the drop of a hat. Though it gets more stable every day, cannabis still operates on a shaky legal foundation and insurers know this.

These risks are more easily quantifiable than the legal uncertainty mentioned above, but they are uniquely risky for cannabis, which inevitably causes their potential coverage to be more expensive. Fortunately, solutions are in the works. The SAFE Banking Act would remove much of the fear surrounding money laundering issues, and the MORE Act or STATES Act would remove nearly all legal uncertainty if they ever pass. But in today’s political climate, a lot of politicians don’t even want to hear about marijuana issues, let alone provide solutions for them.

Insurers are finally starting to step up due to the immense financial potential, but there is still a long way to go. We simply can’t escape the fact that cannabis is still a new and risky industry—a unique kind of risky where it is difficult to even quantify how risky it actually is. In cannabis, we have our known knowns, our known unknowns, and our unknown unknowns. To insurers, cannabis’ known unknowns are riskier than most, and they don’t even want to touch those unknown unknowns. …Is it just me, or does “unknown” no longer look like a word at this point? Anyway, until insurance truly enters the game, cannabis operators will be flying by the seat of their pants.