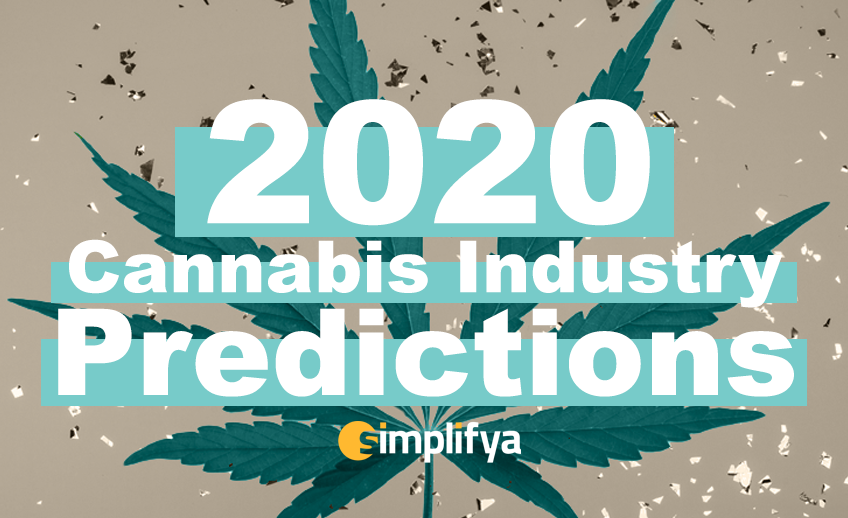 If you thought 2019 was a big year for the cannabis movement, wait until you see what’s in store in 2020. As we reflect on what did and what didn’t happen in 2019, and look ahead to our cannabis industry predictions for 2020, we anticipate that cannabis will likely be fully legalized in at least seven states, including Arizona, Montana, New Jersey, New Mexico, New York, Oklahoma and Vermont. We’re also likely to see medical cannabis legalized in at least three additional states: South Dakota, Nebraska and Mississippi.

Here are our cannabis industry predictions for 2020…

Arizona voters will likely get another chance to vote on legalizing adult-use cannabis. The state narrowly rejected recreational cannabis in 2016, but efforts are underway to get the issue on the ballot again in 2020. The political action committee Smart and Safe Arizona is in the process of gathering signatures to place another recreational cannabis measure before voters. As long as the group collects 237,645 signatures by July 2, 2020, its measure (the Smart and Safe Arizona Act) will make the ballot. The group has already collected more than 150,000 signatures.

Prediction: A similar measure narrowly failed in 2016 (51.32% – 48.68%), and support for recreational cannabis has only grown in the intervening years. Voters will narrowly approve the Smart and Safe Arizona Act in 2020.

Recreational cannabis will likely be on the ballot in Montana in 2020. New Approach Montana is pushing a statutory proposal (the Montana Marijuana Regulation and Taxation Act) that would establish the rules for a new adult-use cannabis industry and another initiative that would tweak the state constitution to ensure that only adults aged 21 years and older could purchase recreational cannabis. The group submitted the initiatives to the Montana Secretary of State’s office on Jan. 13, 2020. If the state approves the initiatives, the group will have until June to collect the requisite number of signatures to qualify for the ballot (25,500 signatures for the statutory proposal and 51,000 signatures for the constitutional amendment).

Prediction: Voters will approve New Approach Montana’s initiatives, if they make the ballot.

In 2019, the New Jersey legislature also tried, but failed to pass adult-use cannabis legislation. Instead of passing legislation, on Dec. 16, 2019, the state legislature submitted the question of whether to legalize recreational cannabis to voters. If voters approve the measure, lawmakers will then have to write the specific rules that will govern the new recreational market.

Prediction: Nearly 60% of voters in New Jersey support legalizing cannabis for recreational use. The measure will pass.

In her state of the state address, Gov. Michelle Lujan called for lawmakers to legalize marijuana in the 2020 legislative session. The legislature moved toward legalization in the last session- the House passed a recreational cannabis bill- but that bill stalled in the Senate. Senators have already introduced a similar bill to be taken up this year. This year’s session begins January 21st and lasts for only 30 days so expect votes to take place soon. Some polls show that New Mexicans support legalization by a whopping 75%, which should make it easier for the legislature to take action.

Prediction: The legislature will legalize recreational cannabis in its brief 2020 session.

Full cannabis legalization will not be on the ballot in New York in 2020. If adult-use cannabis is legalized in New York this year, it will only get done through the state legislature. In our cannabis industry predictions for 2019 post, we predicted the New York legislature would legalize recreational cannabis, but efforts failed in the last legislative session over disagreements on issues like social equity and taxation. Proponents could not get enough senate democrats to vote yes. However, it sounds like the legislature will try again in 2020, and it will once again have the Governor’s support. For the second year in a row, in his state of the state address, Gov. Cuomo said legalizing cannabis is a top priority.

Prediction: Drawing on lessons learned from failed attempts at legalization in the past, the legislature will compromise on key issues in 2020 to pass a legalization bill.

A combination of activists and the national political action committee New Approach are working to get an adult-use cannabis measure on the 2020 ballot in Oklahoma. The activists submitted their measure to the Oklahoma Secretary of State’s office in December. If the state approves the measure, the activists will have 90 days to collect roughly 178,000 signatures to get the measure on the 2020 ballot. The measure includes provisions very favorable to the Oklahoma medical cannabis industry. For example, it only allows existing medical cannabis licensees to be eligible for recreational cannabis licenses for two years. The medical cannabis industry in Oklahoma has grown rapidly since it launched in 2018 and its support for the recreational measure will be crucial to its success.

Prediction: If the recreational measure makes the ballot and has the support of the medical cannabis industry, it will pass.

In 2018, the Vermont legislature adopted legislation allowing adults to grow and possess limited amounts of cannabis, but it never legalized the sale of adult-use cannabis and never established a legal commercial market. Now, the legislature is close to taking that next step. In February 2019, the Vermont Senate passed S. 54, a bill to tax and regulate cannabis, by a vote of 23-5. The House adjourned in May without voting on the bill, but is expected to vote on it in 2020. Governor Phill Scott said he would not sign a bill legalizing recreational cannabis sales unless it permitted roadside saliva testing for THC. If the legislature adopts a bill that does not include roadside saliva testing for THC, it may have to do so with a veto-proof majority.

Prediction: The legislature will pass a bill establishing a legal commercial market in 2020 with a veto-proof majority.

Mississippians for Compassionate Care gathered enough signatures to get a medical cannabis measure on the 2020 ballot…but it might not be the only medical cannabis measure on the ballot. The state legislature could amend the measure, in which case both the Mississippians for Compassionate Care’s measure and the state legislature’s amended version would appear on the ballot together. The measure that receives more votes would prevail.

Prediction: Voters will have to choose between two competing medical cannabis measures but the measure put forth by Mississippians for Compassionate Care will receive more votes and prevail.

The Nebraska legislature has rejected medical cannabis legislation repeatedly since 2010. Most recently, in the 2019 legislative session, Sen. Anna Wishart (D) introduced a medical cannabis bill that advanced out of committee but then stalled in the Senate. With little to no possibility of getting support in the legislature, Sen. Wishart (D) and Sen. Morfeld (D), with the backing of the Marijuana Policy Project and New Approach PAC, formed Nebraskans for Medical Marijuana for the purpose of getting a medical cannabis measure on the November ballot. The group needs to collect roughly 130,000 signatures by July for its measure to qualify.

Prediction: If the medical cannabis measure makes the ballot, voters will approve it.

South Dakota residents will be voting on two cannabis initiatives in November. For the first time ever, there will be both a medical cannabis and a recreational cannabis measure on the state’s ballot. Activists, with financial backing from national organizations Marijuana Policy Project and New Approach PAC, formed the group South Dakotans for Better Marijuana Laws to push the initiatives. This is a dramatic step for a state whose Governor is not only opposed to legalization but recently vetoed legislation allowing industrial hemp production in the state.